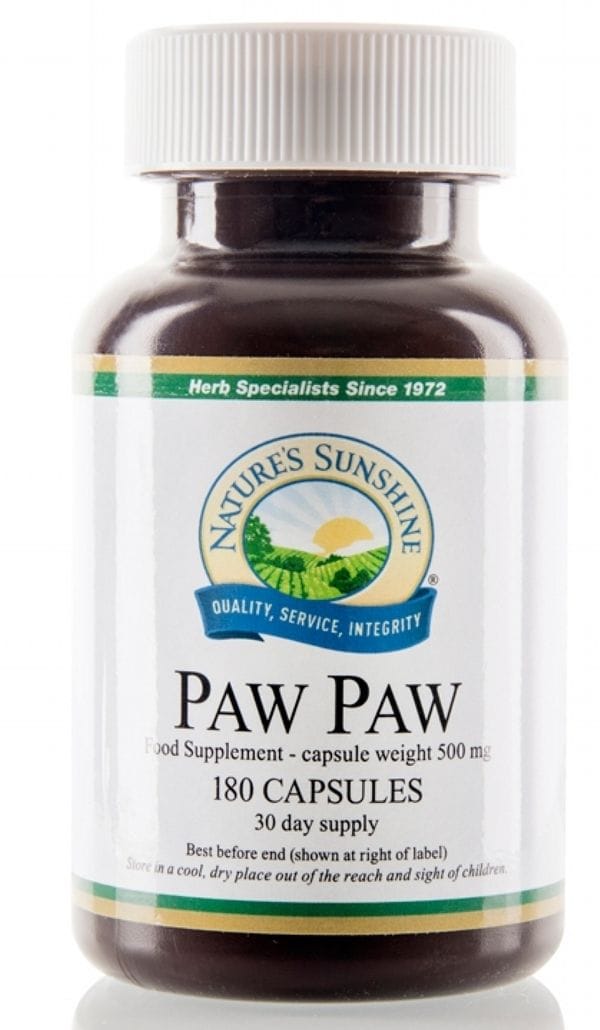 Did You Know?
Asimina triloba, otherwise known as the common paw paw, is a small deciduous, clonal tree native to the eastern United States and Canada found in well-drained, deep, fertile land. The disagreeable-smelling leaves, twigs, and bark of paw paws contain a source of substances known as acetogenins.
What are the benefits?
Paw Paw is a unique product that selectively targets specific cells. Nature’s Sunshine uses an extract of the twigs of the North American Paw Paw tree, which contain the most concentrated amount of acetogenins. Acetogenins are active compounds that affect the production of Adenosine Triphosphate (ATP) in the cell’s mitochondria. ATP is the main source of energy inside your body that keeps everything moving along. It’s the high-energy molecule that stores energy in your body and gives your cells the energy they need to function. Acetogenins selectively regulate ATP’s production in certain cells, and by doing so, can also help regulate the blood supply to them.
In the early 1970’s, university professor Dr. Jerry McLaughlin was the first to focus on the Asimina Triloba, better known as Paw Paw. In his research, Dr. McLaughlin found that it was a source of phytochemicals called acetogenins. He and his graduate students isolated over 40 of these acetogenins.
Paw Paw is covered by several US patents, and the use of paw paw generically for several purposes has been covered by over a dozen patents belonging to Dr. McLaughlin. Dr. McLaughlin served as the Vice President of Research and Development for Nature’s Sunshine and licensed his methods and formula exclusively to NSP.
Paw Paw is often confused with its cousin graviola. During his research, Dr. McLaughlin tested several brands of graviola that were marketed as paw paw. The tests indicated that these graviola products were far inferior to real paw paw. Firstly, the acetogenins found in graviola do not have the same potent chemical structure found in the acetogenins in paw paw. Secondly, Dr. McLaughlin found that these products were not standardized—in other words, the amount of acetogenins varied wildly. The best graviola product that he tested was found to be only 4% as powerful as paw paw.
Note: From time to time we get questions about other products that contain the words "paw paw". Nature’s Sunshine’s Paw Paw product is the only one researched and developed by Dr. Jerry McLaughlin and is produced according to his methods.

Note: Not suitable for use during pregnancy, whilst nursing, or by those planning to conceive.
CoQ10 and Thyroid products may decrease the effectiveness of this product.

Do not exceed recommended serving size. If exceeded nausea may occur.

© 2120 😉 vipnsp.eu. All rights reserved.
Copying of site materials without the consent of the site administration and back link is prohibited.
Data processing policy
Public offer